I can not believe she wrote about him before writing about me. 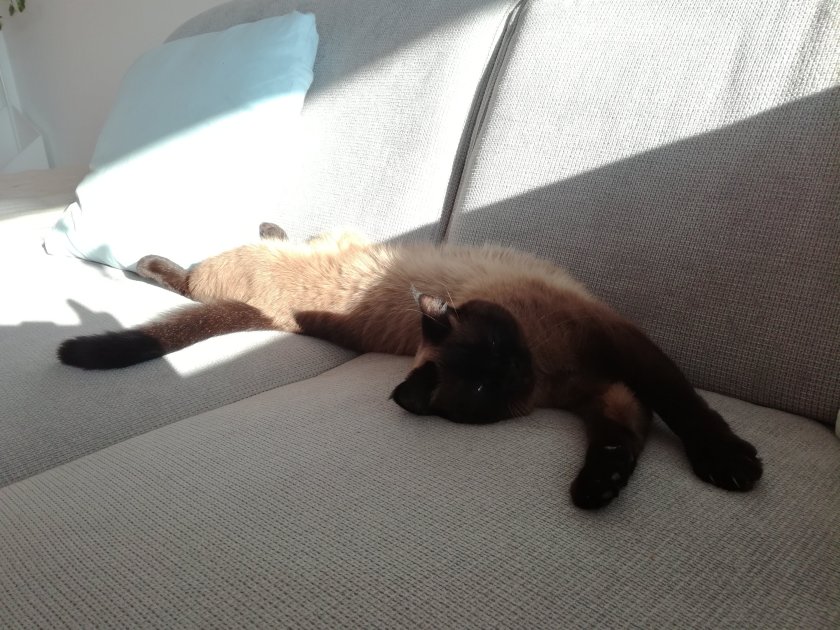 Hi, I am Coco. I live with Rambo and two humans- though I call them admirers – in my flat. I am older than my furball admirer, and he calls me sneaky. Well, I am half his size and weight, so a girl has to be, right? I can still hold my own in a fight with him. And we do fight a lot- awesome!

At night, I reside on my own pillow in the huge bed- my she-admirer sleeps below me to protect me. In the morning I climb on her chest to wake her, yet it never works. Wishing you could get some cuddles out of her arät that time also is useless, mostly. The he-admirer is a safe bet, though, so often I just wiggle under his arm and enjoy his sleepy fingers in my fur. Hmmmm.

He is actually my favourite playmate- I taught him how to play catch and I just love racing through the flat chasing him or letting him chase me. He is fast! He calls my tail a squirrel-tail then, I don’t get it, but he looks adoring when he calls me that, so I guess that is fine.

My she-admirer is perfect to go to when she is on the sofa. In the morning I lounge on her lap when she has her coffee and I get all the attention- can’t get better! Often she reads something and pets me rather absently, yet I get my revenge for this neglect when she writes (unbelievable how often she does that!) because I steal her biro or play with it until she gives up and cuddles me the way she should. She always laughs then and is a very happy admirer. When the mood strikes I help her correcting, too, and meow loudly so she does not forget me; or lately I have sat on his lap and watched him play with numbers.

When nobody is home, I can spread my toys in the flat, another important task. There is a paintbrush I love, and a yellow decoration band, and my favourite- the he-admirer’s shoelaces. Sometimes I rip pieces out of a cardboard box (the furball’s bed, kind of, though I don’t get why) and spread them in the living room. I also leave lots of fur. There, mine.

I don’t have to say that I do yoga much better than my she-admirer – her shoulder twist looks ridiculous compared to my elegance. It is nice of her to try, though.

Lounging and looking cute are my best assets to be constantly admired, and this is hard work. On the balcony there is a pillow with my name on it- I must look good sunbathing on it among all the colourful pots of plants, so I have claimed it as mine.

I am happiest, however, curling up on somebody’s chest and cuddling. I might be a softie after all.

daydreamer, hopelessly hopeful, I love the power of words, I love poems, words are soulfood View all posts by carasmelody